I’ve decided to add a few reviews here. They will be short and express solely my point of view. The same reviews will appear or have appeared in my Goodreads account, which is this one:
https://www.goodreads.com/author/show/8377818.Lizbeth_Gabriel
The first review will be on Transmetropolitan series by Warren Ellis, which is one of my most favourite comic series ever. 🙂 So, a solid 5 out of 5 stars!* 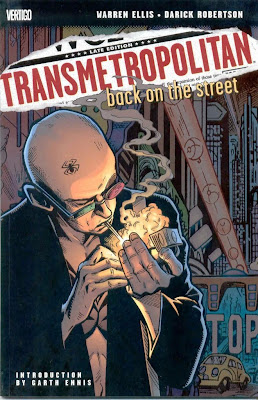 I have no words to describe how good this one is. I consider it one of the treasures I have on my book shelves. A life-changer, page-turner of a comic series, filled with profanity, drugs, humour, the protagonist’s unusual sense of justice and the writer’s vision of the not-so-far future. Incredible, jaw-dropping visual art by Darick Robertston in all ten graphic novels that brings the characters and story to life. The series grabs you by the lapels and doesn’t let go until you find yourself at the other end of the universe, dazed and astounded. It never loses its frenetic pace. It’s outrageous, bizarre, amazing, preposterous, glorious, obnoxious, brilliant and brimming with entrails, excrement, explosions and journalistic badassery. I can’t praise it enough.

PLEASE DO NOT ATTEMPT TO READ IT if you are easily offended or too keen on politically correct; you just won’t get it. The writer shows no mercy to any form of hypocrisy or human right violation. He literally bulldozes his way through human relationships, political games, religious gurus and their followers, police brutality and victimisation of minorities. He’s not polite. He’s not pleasant. He’s not proper. But he’s spot on, and hilarious and obscene in a way that warms your insides.

If I could turn this series into a religion, I would.

One of my oldest fans

The Left Hand of God