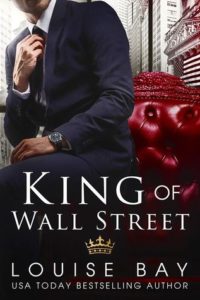 Three and a half stars.

I won King of Wall Street in a giveaway. I gained the favour of fickle Lady Luck by expecting fish to grow legs and ride a bicycle before I win anything in a giveaway. In retrospect, winning was inevitable. This has nothing to do with the review I am about to write, except for the fact winning the book allowed me to write the review in the first place. It’s like the chicken and egg argument without vegans butting in. My opinions are my own, especially when I wear my tinfoil hat. During other times I am not so sure. I sometimes wake up in my kitchen with an opened can of cat food in my hand, surrounded by a horde of screaming felines and no memory of how I got there. But I digress.

I enjoyed King of Wall Street. It was fun, sexy, quirky, with a nice sense of humour and very few/tiny mistakes. Overall it was a very enjoyable read. If you want to relax your mind immersed in a modern-day romance story, look no further. Don’t expect to cry tears of enlightenment over it or gape with amazement at the sudden plot twists. It’s a very decent book for its genre, better than many others I’ve read, more freshly written, funnier and sexier. It’s also predictable for the same reasons most romance novels are predictable. I mean, you know that these two are going to end up together, just don’t know how they will get there and that’s why you read the book.

The heroine is admittedly a bit irritating. She makes the mistake of mixing business with pleasure with every unpleasantness this entails. Sometimes her reactions are immature, but since one of the basic plot elements is her relationship with her father, it makes sense. Or at least it did not bother me. I don’t expect heroes to be perfect. I only expect their actions and decisions to make sense according to what we know about their past and personalities. As such, she made perfect sense.

The only real complaint I have is the hero. Yes, yes, his fourteen-year-old daughter is his precious snowflake and if she wears a short skirt the firmament will tremble and the world will end, devoured by giant locusts or something. He’s a tough, tough mother… cracker, and he’s the best at what he is, the fear of lesser men, blah de blah. But. Although his daughter is as innocent as the driven snow and her purity must be guarded till his last breath, he sees the heroine as a magnificent a$$ and a perky pair of boobs that accidentally have a face and a name. Oh, and guess what! That tough guy is constantly bossed around by his female relatives. How this works, I honestly don’t know. Then again, it’s a trend in many romance books I’ve come across. Men at the pinnacle of success who are superior to other men, leaders of the pack, fearless predators, yet their relationship with women is either to cower in front of their female relatives or see orifices instead of people. I think that, too, is a result of the alpha male role model romance writers are desperate to incorporate in their books because it is the synonym of ‘successful’ and ‘interesting’ (=sales). Then they find themselves stranded with a caveman in a suit and desperately try to humanise him, turning him into a walking contradiction in the process, because they have to show he has a vulnerable side that does not fit anywhere in the previous picture. Whoopsie.

Yes, yes, I know. I went and wrote a feminist analysis on a romance book. Bite me, it’s really late. I am off to wear my tinfoil hat and feed my cats. Despite my complaints, I am looking forward to reading more books by the same author. I had lots of fun with King of Wall Street.